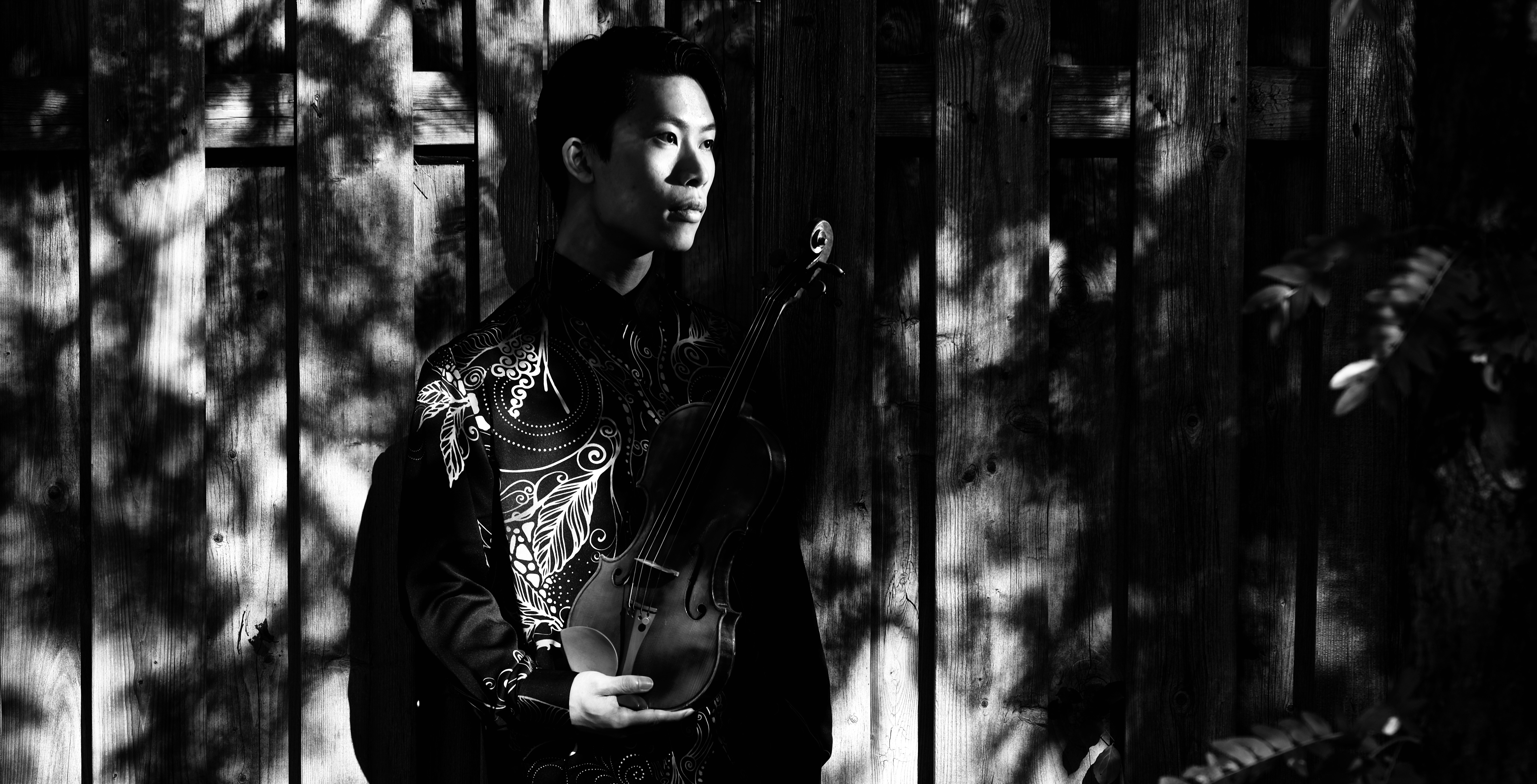 “The dark, rich sound he produces from his Guarneri del Gesù, the warmth of his phrasing, and his musical imagination result in a singularly beautiful recording.“ (Fanfare)

“With a smooth and magical tone, devilish precision of intonation and a variety of colours and nuances embracing the twists and turns and changing atmospheres of the composition, the Ottawa violinist almost hypnotized the audience.” (originally in French)  (Le Devoir)

Toronto Summer Music is going virtual again this year, but the concerts will be as real as the musicians can make them

“Kerson Leong undoubtedly places himself on the highest peaks and stands shoulder to shoulder with the brilliance of Kremer, the freedom of Korcia, the sensitive finesse of Papavrami, the sovereign balance of Zimmermann, the spontaneity of Ibragimova, outclassing even the generosity of Mordkovich or the too tumultuous tensions of Zehetmair. More than a discovery, a real revelation.“ (originally in French) (Classica)

“His recording could be a happy first choice for any discerning listener.“ (Gramophone)

“…the new disc by the Canadian violinist Kerson Leong for Alpha: dazzling and dexterous.“ (The Guardian)

“With a keen interest in physics, the Canadian violinist Kerson Leong studied the behaviour of vibrating strings. With this knowledge, he optimizes his interpretations and reaches unimagined heights in his new Ysaÿe recording.” (originally in German) (RBB Kultur)

“The Canadian violinist not only deploys awe-inspiring tone and dominates his subject matter, but makes his mark with impressive imagination, romantic fever and brilliance.“ (originally in French) (ConcertoNet)

“[Kerson Leong] was absolutely imperial in Samuel Barber’s Violin Concerto, Opus 14, one of the great concertos for this instrument written in the 20th century. Dressed in a simple black shirt trimmed with gold, the musician is distinguished by an opulent sound, dream treble range, and an unsettling ease.“ (originally in French) (La Presse)

“…Kerson Leong showcases remarkable playing, undoubtedly of a world class. The mastery of tone colour, projection and articulation of the soloist are all his own.” (originally in French) (PAN M 360)

“His sensitive violin playing ultimately restored Barber’s image to me a bit, which is no small feat.” (originally in French) (Sors-tu?)

“He demonstrates an excellent sense of phrasing, pure intonation, and flawless virtuosity in the third movement, presto in moto perpetuo, short but very thrilling, and demanding for the soloist. Bravo.” (originally in French) (Ludwig van Montréal)

“At 24, the young Canadian violinist possesses a natural command and a devastating charisma, a mixture of spontaneity and mastery, elegance, fantasy, intensity that makes his sound recognizable from the first notes.” (originally in French) (Le Monde)

“He offers a vision not only of total command (impeccable intonation, bow technique of the highest order) but also full of inspiration. How not to admire the quality of performance, the homogeneity of style, the risk taking?” (originally in French) (Diapason)

Record of the Month: A journey into the soul of the violin

“Leong plays with all his heart and captures the listener in his inner world. He overcomes the infernal difficulties of Ysaÿe’s solo sonatas and turns them into expressive power. Even in the most sophisticated double stops, chords, and virtuosic runs, there is always a perspective over the instrument – the will to tell a story.” (originally in Finnish) (Rondo Classic)

“…Kerson Leong easily places himself among the most beautiful recent versions of these inexhaustible pages imagined by the genius of Eugène Ysaÿe.” (originally in French) (Crescendo Magazine)

“Ysaÿe remains a story of the past and the future, of pride, intelligence and sensitivity. Kerson Leong is happy to tell you his story.” (originally in Dutch) (Cultuurpaakt)

“Canadian violinist Kerson Leong has just released Ysaÿe: Six Sonatas for Solo Violin (Alpha) on disc. I might as well tell you right away: it’s the bomb.” (originally in French) (Classique mais pas Has Been)

“It quickly becomes clear that Leong, despite his young age, has absorbed and grasped this music very profoundly. His playing is so technically polished and so richly faceted and nuanced that one might wonder why others have difficulty with these works.” (originally in German) (Pizzicato)

“The Canadian violinist plays the solo sonatas by Eugène Ysaÿe with burning intensity and a characteristically sonorous tone.” (originally in German) (Rondo Magazin)

“A violin master “must be a violinist, a thinker, a poet, a human being, he must have known hope, love, passion and despair, he must have gone through the whole range of emotions to express them all in his playing”. Kerson Leong has understood this very well. He plays them ‘grandioos’!” (originally in Dutch) (Stretto.be)

“…Kerson Leong is now one of the country’s elite classical violinists. His gifts have led him to an international career that has only just begun.”(PAN M 360)

Let the Strings Go Free: The Lyricism and Physics of Violinist Kerson Leong

“When Leong was 13, he was selected as a competitor in Menuhin Competition Oslo where he won junior first prize. Around the same time, his father – both a music lover and a scientist – started teaching Leong about the physics of the violin.” (VPM)

Review: A Tribute to Ysaÿe

“…in the Légende norvégienne Leong plays with rhythmic freedom, as if improvising…

…Guillaume Lekeu, who wrote a sonata for Ysaÿe, performed by Leong with passion and urgency.” (The Strad)

“Indeed, the performance of I Musici and Kerson Leong, the guest soloist, was nothing short of breathtaking and memorable …” (originally in French) (Atuvu.ca)

“The first work, John Corigliano’s Red Violin Suite, provided us with striking new evidence that violinist Kerson Leong has undergone a spectacular transformation from a child prodigy to a seasoned virtuoso and an accomplished artist. Each of his visits is an immense joy: purity of intonation, brilliance of the top register, power of sound, resonance of the G string are superior to what one hears from many established soloists engaged here.” (originally in French) (Le Devoir)

“Cherished by some, vilified by others, the fiery red wooden heroine of Francois Girard‘s 1998 movie: The Red Violin has certainly shaken up human passion by making her way through three centuries and passing into the hands of diverse owners from different ethnic backgrounds. Her journey will eventually lead her to an auction house in Montreal, ready for new adventures…

…Gen’s Delights had the pleasure of interviewing Kerson. From his answers, it is clear to see that he shares a very special bond with his instrument.” (Mountain Lake PBS)

“Leong plays on a gloriously warm-sounding Guarneri del Gesu violin and the influence of his mentor Augustin Dumay was clear in his rich tone, fluid bowing and natural lines. At just 22, he displays remarkable mastery of the violin.” (The Straits Times)

“The first half concluded with a barnburner, Sarasate’s Zigeunerweisen, played by that wunderkind of Canadian violinist Kerson Leong. At 22, he’s no longer “promising” but has “arrived.” He also plays on a Guarneri del Gesu, not too shabby! One can’t help but be impressed by his jaw-dropping technique. That said, he’s no mere technician. Everything is executed with uncommon musicality and expressivity. I grew up on recordings of Heifetz, Perlman and all the greats, and one can get a bit jaded with this piece, but Leong was so superb that I found myself smiling the whole 9 minutes.

He then opened the second half with four pieces composed/arranged by Fritz Kreisler. The dazzling virtuosity of Leong’s playing took my breath away. Yes, I admit I’m easily impressed by prodigious technique, but in all honesty, I sense a true musical heart underneath all that razzle-dazzle.” (Ludwig van Toronto)

“Leong has matured into an intelligent, inquisitive young musician with a gorgeous sound and just the right amount of dramatic fire.” (Artsfile.ca)

“In this [Bartók] 1st Concerto, Kerson Leong confirmed that he is a great, with a smooth and forceful sound, an intense expression.” (originally in French) (Le Devoir)

“Kerson Leong enjoys roaming in galleries and museums, sitting in cafes, observing and letting his mind wander in order to be filled with emotions that could become sources of inspiration. One needs this in order to play the violin like he does. With a mastery that never fails, a gravity free from heaviness, an immense depth, experience, and elegance.” (originally in French) (La Presse)

“Kerson Leong, the [Orchestre Métropolitain]’s current soloist in residence, gave us a breathtaking demonstration of skill and high aerobatics. His performance earned him a standing ovation and an almost endless wave of applause.” (originally in French) (Atuvu.ca)

“Take a glance at violinist Kerson Leong’s engagements for the 2018-19 concert season and you might get a little overwhelmed. The 21-year-old Ottawa native will perform on stages from California to the Canary Islands (with many stops at home in Canada), playing works ranging from solo Bach to chamber music to full-blown Romantic concertos.

Leong is living the dream — and putting in all the hard work that goes along with that — while raising the bar he already set so high for himself last season.

With so much going on, we contacted Leong to get the latest. Here are six things to know about the busy young violinist.” (CBC Music)

“Leong has a confident mastery of this work. His playing was at times plaintive, at other times powerful and virtuosic. Rutter says he found his inspiration in the dark inside London’s Temple Church, surrounded by the graves of the Knights Templar. You certainly get that feel from the piece.

The audience leapt to their feet after the piece was completed and called Leong back to the stage where he played an effortless Andante movement from J.S. Bach’s second sonata for violin.” (Artsfile.ca)

Music and Beyond: Kerson Leong is a man on the move

“It’s always worth catching up with Ottawa’s violin phenom Kerson Leong. ARTSFILE had an opportunity to do just that before the young soloist’s appearance at the Music and Beyond Festival on July 12. He’ll also perform a piece written for him by John Rutter in concerts conducted by the composer on July 15 and 16. But before these gigs, he had places to be.” (Artsfile.ca)

“The musician we have in front of us now has nothing to do with the one we knew. Kerson Leong remains brilliant, but he has added this patina and, deep down, this class. He delivered an intense (in terms of sonority) but never syrupy version of Barber’s concerto, perfectly supported by the Metropolitan and Nicolas Ellis …” (originally in French) (Le Devoir)

“When I received the score, I was struck by the unadulterated lyricism and transparency of the violin part and the intertwining dialogue between my line and the choir’s. The music flowed very naturally under my fingers and I was moved to learn that John had moulded the piece to suit my specific playing style.”

“Kerson Leong is back. The Kerson Leong who dazzles us and amazes us because he seems to remain one step ahead.” (originally in French) (Le Devoir)

“I wasn’t able to meet Kerson Leong in the flesh before I wrote for him, but I listened to recordings of him (there are not many, he is only 19) and I was deeply impressed not just with his formidable technique but equally with his beautiful range of tone colours and his thoughtful expressiveness. I sent him his solo part, asking if there was anything he wanted changed, and the answer was ‘not one note of it’, which was encouraging – then when we finally met in London for rehearsals, I was amazed at his insight into all the nuances I wanted but which are hard to put on paper. He just seemed to get inside my head, and I had almost nothing to say in rehearsal. The first performance was magnificent, and when the time came for the recording, it was more than just a courtesy to invite him to play – he absolutely had to be the soloist, and with much juggling of schedules we all got together in July and he repeated the miracle.”